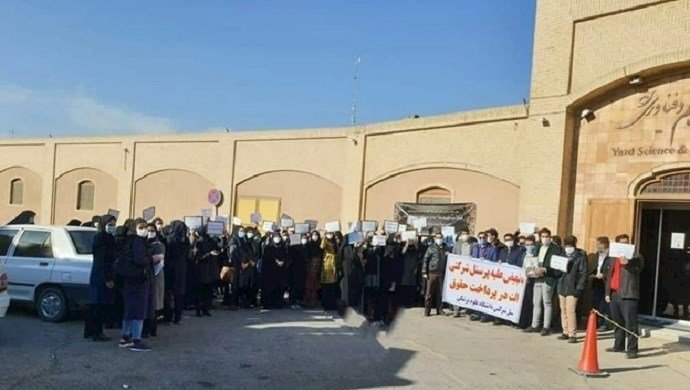 Iran, January 7, 2021—On Monday, January 5, the staff and nurses of hospitals in different cities of the country, including Khuzestan, Isfahan, Yazd and Karaj, gathered in their workplaces, seeking answers for their pending demands.

Nurses and contract employees of the Yazd Medical Sciences University also gathered in front of the MP’s office, protesting the change in their employment status and discrimination in the payment of salaries and job benefits.

Also, a group of employees of Khomeini Hospital in the city of Karaj, northwest Tehran, gathered in front of the Alborz Governor’s Office protesting unpaid salaries.

During the rally, they chanted slogans such as “enough with the promises, our tables are empty,” and they demanded their demands be fully met.

Strike by Faryab mine workers in Kerman province

On Tuesday, January 5, workers of the Faryab mine in Kerman province went on strike for the fourth consecutive day, protesting the officials’ refusal to pay their wages demanding the implementation of the job classification plan.

Workers at the Faryab chromite mine in Kerman province have been on strike since Sunday, protesting their several-month delayed paychecks in 2019 and their unclear contract status in 2020.

According to the protesting workers, they do not have proper work suits, contracts and paychecks, and any protest in this mine will be answered by deduction of salary or dismissal.

On Tuesday, a group of workers in the Lorestan Agro-Industrial Complex Company held a protest rally for the second consecutive day, demanding a change in their job contracts to direct contract.

These workers held a similar rally on January 3, stopping working for several hours and gathering in the compound’s yard. They are seeking answers to their demands by company officials.

“We have been pursuing the change in our job status for several years and we have been demanding our legal claims from the company, but so far no official has been held accountable,” the protesting workers said.

Protest rally by workers of the Navid Zar Chimi in the port of Mahshahr, Khuzestan province

A group of workers of the Navid Zar Chimi Company in the city of Mahshahr, gathered in front of the company building on Tuesday, protesting their delayed paychecks.

The protesters, who had previously gone on strike, say that in addition to not paying their salaries for several months, the company’s executives are refusing to grant special zone privileges to employees because the company is private.

The workers say the protests will continue in the coming days until their demands are met.

The cry of hungry workers and retirees in the city of Shadegan, Khuzestan province, southeast Iran

A group of families of workers and retirees who have gone below the poverty line due to high prices and inflation, held a protest rally on Wednesday, January 6, holding placards reading “Cry of hungry workers retirees.”

“The officials who are sitting there are and only thinking about themselves and their children! So, when did you care about us? Aren’t we Muslims? You who claim to be Muslims, why don’t you care about these children whose parents do not even have the money to buy dry milk for them?” said one of the women participating in the rally to the officials.