Iran’s society is on the verge of an explosion 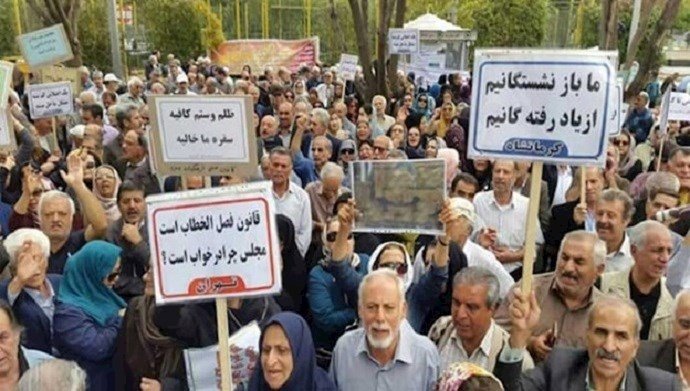 Iran, December 24, 2020—The majority of Iran’s population live in poverty. Among the struggling communities are the retirees, whose income after 30 years of hard work is at one fifth of Iran’s poverty line, valued at about 100 million rials (approx. $380). The situation has led to constant protests in various provinces.

In the past weeks, communities of pensioners have organized demonstrations against poverty and discrimination in Tehran, East Azarbaijan, Isfahan, Alborz, Ilam, Razavi Khorasan, North Khorasan, Khuzestan, Zanjan, Gilan, Lorestan, Central Province, Hamedan, and Yazd. They protest their wages being incomparable to current government employees. According to state laws, the difference between the wages of employees and retirees shouldn’t be higher than 15 percent. But today, the gap stands at above 50 percent.

Some state-run media, including the daily Hamdeli, warned of a possible nationwide protest.

“Many social riots after the revolution began in these areas,” wrote the paper on December 13, adding, “We are cutting corners in sectors that have previously hurt us. The January 2018 protests started by those who were concerned about their daily livelihoods.”

The retirees are not the only segment of the society being hit by economic problems that have been exacerbated by the coronavirus crisis. In recent weeks, in Tehran and other major cities, the protests of various classes in the society continue against the regime’s mismanagement and inhuman policies. But due to the regime’s repressive measures and censorship, it is not possible to gather all the information. However, the considerable number of protest rallies in the past month indicates the extent and depth of dissent across the society.

Also, people living in regions hit by seasonal floods protested the regime’s inaction and negligence toward their situation. The regime’s inhuman delay in providing any support has imposed poverty, misery, and oppression on these people.

In their slogans, the protesters targeted regime’s officials as the main sources of their problems. The flood victims in Khomeini Port occupied the municipality. In another protest movement, political prisoners went on hunger strike in different prisons.

A bankrupt economy, skyrocketing prices, and the looting of people’s wealth by the regime have impacted the lives of millions of Iranians. The people struggle for the most basic needs. All these protests are to realize the most basic wages, much of which remain unpaid by the regime.