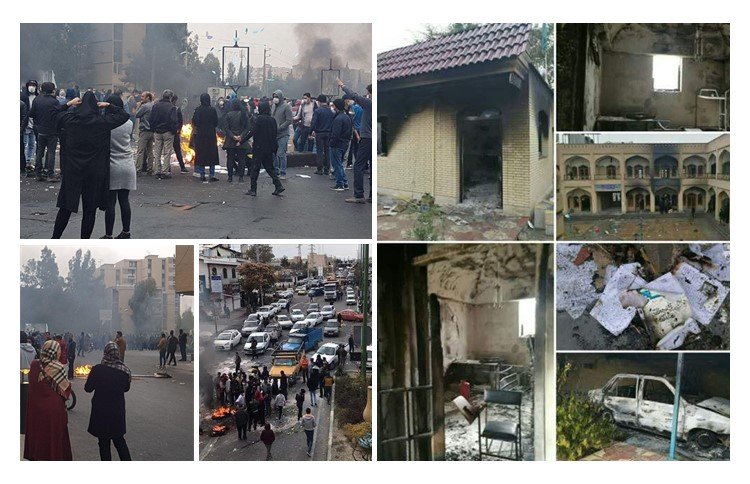 For the past two days, and after the abrupt announcement of increasing gas prices hikes by the government, the Iranian people poured into the streets in more than 100 cities. However, while the protests began against the government’s approval for rising fuel prices, they immediately targeted the ruling system in its entirety. Notably, after the Supreme Leader Ali Khamenei defended the rising of fuel prices, protests intensified.

“When the heads of state adopt a decision, one must look at it favorably. I’m not an expert in this field. I said this to the officials. Experts have different opinions on the issue of gasoline. Some see it as vital, and others think it’s harmful. I said I’m not an expert, but if the heads of the three branches decide on it, I will support them. That’s what I said, and I will support them.” Khamenei announced in his primary lecture on November 17.

The nationwide protests severely terrify the Iranian rulers. In recent demonstrations in Iraq and Lebanon, they called their surrogates to crack down with showing no mercy. “We have experienced such protests in Iran, and it should be quelled forcefully,” an Iraqi security official quoted the commander of Revolutionary Guards’ Quds Force Qasem Soleimani as saying.

In this regard, the Iran-dominated government in Iraq started a brutal suppression using snipers and black masked-men against Iraqi protesters. In Lebanon, the most prominent Iran-backed group in the region, Hezbollah, attacked peaceful protesters’ rally in Beirut and torched their tents. However, the Iranian government’s plan failed to stifle widespread protests in both countries. Insofar as despite a militant suppression in Iran and the murderer of dozens of youths, protests are still going on.

The Iranian authorities resorted to cutting off the internet to prevent the news from reaching the world. They also pursue to quell the rightful Iranian demonstrations in silence. In this context, Ali Khamenei frankly ordered his thugs to slaughter protesters justifying, “No wise person who loves his country, who loves his suitable life, mustn’t help these [protesters]. These are ‘hooligans’!” He also admitted, “Some people are worried or angry over this decision [gasoline prices hike], or it’s to a detriment, or they think it is, and they are unhappy.”

However, the question is, despite the authorities anticipating the society’s reaction, why did they adopt this approval? Notably, the gas prices hike is taking place while discussions over this plan have been lengthened over a year in Majlis sessions. The reality is the Iranian government’s situation has never been as “difficult and complicated” as it is today. “Iran is experiencing one of its hardest years since the 1979 Islamic revolution,” Iran’s President Hassan Rouhani said in the city of Kerman, November 12.

Rouhani admitted the impact of the U.S. sanctions ruined the Iranian government sponsorship of terrorism and pursuit the nuclear bomb-making program. “When the country faces problems selling oil, how are we supposed to manage the country?” Rouhani raised in the same speech in Kerman. He also stressed that his government needs oil revenue to run the country in denial of Khamenei’s remarks about the “resistance economy” and the growth of “non-petrol industries.”

He also promised to compensate the budget deficit at the expense of the people instead of declining the wages of Iran-backed militias in neighboring countries. “Our annual budget is 450 trillion tomans (around $41 billion). We have two necessities; first, we need rials (Iran’s currency). These 450 trillion tomans… where is this money supposed to come from? Thirty percent of our country’s revenue is provided through taxes and customs. The main revenue that runs the country is oil money,” Rouhani said in Kerman.

However, the recent nationwide protests in Iran have proven that the Iranian people will not allow the government to waste the national capital on its adventurism. While the protests started against the petrol prices hike, they followed by rejecting the state’s expansionist policies in other countries. The slogans, “Get rid of Syria, think about us,” and “Neither Gaza nor Lebanon, my life for Iran,” showed this truth.

In these circumstances, given the horrible economic condition that results from government mismanagement and the squandering of national resources, more protests can be expected. Unless the authorities revoke gas prices hikes, which paves the way for grievances further than economic sectors.