On November 27, 2012, while the imprisoned Iranian Human Rights lawyer and recipient of the 2012 Sakharov Prize Nasrin Sotoudeh was on her 6th week of hunger strike, the United Nations General Assembly’s Third Committee passed two resolutions again this year, condemning the governments of Iran & Syria for rights violations in their respective countries. 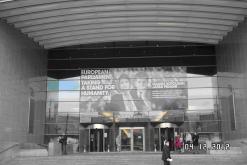 Ms. Sotoudeh, known for defending Iranian dissidents, was arrested in September 2011 and later convicted of spreading propaganda against the government and acting against national security. She had represented many imprisoned Iranian opposition activists and politicians following the disputed June 2009 Iranian presidential elections.  She also represented many prisoners sentenced to death for crimes committed when they were juveniles. Iran is currently the only UN member state that still executes children. While jailed at Evin Prison, Ms. Sotoudeh has protested the restrictions placed on her, her husband, and their 12-year-old daughter, who are barred from leaving the country or visiting her.  She went on hunger strike on October 17th, 2012.  Her family has reported that Ms. Sotoudeh spent 17 days in solitary confinement in punishment for her hunger strike.  Nine other female prisoners also went on hunger strike this fall, alleging abuse by guards, including access to medical care.

Also this October, Sattar Beheshti, a 35-year-old Iranian blogger who maintained a site on which he criticized the Iranian government, was arrested on by the cyber police without a warrant. He was taken to Tehran’s Kahrizak detention facility, where he was reported to have been subjected to ill-treatment and/or torture. On November 6th, prison authorities contacted his family, asking them to collect his body.  The United Nations has called for an investigation of this incident.  Mr. Beheshti’s murder while in custody resembles many other previously reported instances of extrajudicial killings by Iranian authorities.

“Harsh prison sentences handed down to journalists and bloggers, following trials in which defendants’ rights to due process and a fair trial are not guaranteed, exemplify broader conditions of severe restrictions on freedom of expression and opinion”, noted the Special Rapporteur on the promotion and protection of the right to freedom of opinion and expression, Frank La Rue on November 15, 2012.

The U.S. Foundation for Liberty condemns Iranian government’s inhuman treatment of its citizens, disrespect for international law, and its crimes against humanity committed or enabled in both Iran & Syria.  With these crimes, Iranian and Syrian governments are trying to suffocate voices of Liberty.  It is on us to refuse to be silent.  It is on us to be the voice of those who, because of these crimes, cannot speak for themselves.  We call on the international community, especially concerned citizens of the United States, to help us shed light on these atrocities and on those who are responsible for committing them.