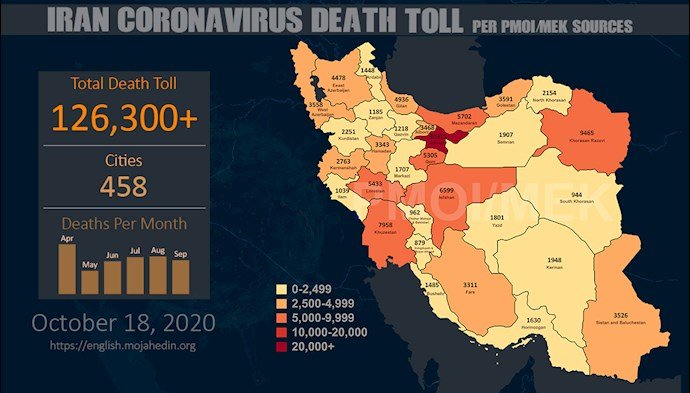 Iran, October 17, 2020—Over 126,300 people have died of the novel coronavirus in 458 cities checkered across all of Iran’s 31 provinces, according to reports tallied by the Iranian opposition as of Sunday afternoon local time, October 18. The official death toll declared by the regime stands at 30,375, around a fourth of the actual figure.

The coronavirus death toll in various provinces include: 30,311 in Tehran, 9465 in Razavi Khorasan, 6599 in Isfahan, 5702 in Mazandaran, 4478 in East Azerbaijan, 3558 in West Azerbaijan, 3468 in Alborz, 3343 in Hamedan, 3311 in Fars, 2763 in Kermanshah, 2251 in Kurdistan, 2154 in North Khorasan, 1948 in Kerman, 1801 in Yazd, 1630 in Hormozgan, 1448 in Ardabil, 1039 in Ilam, 962 in Chaharmahal & Bakhtiari, and 879 in Kohgiluyeh & Boyer Ahmed. This is in addition to reports obtained from other provinces.
“The number of cities in red conditions have increased from 187 to 215. This week the number of people seeking medical treatment for Covid-19, those hospitalized, and the death toll escalated in comparison to the week before,” said the spokesperson for the regime’s Health Ministry on Sunday. “The average number of people hospitalized in each hospital has reached 15.8 people for every 100,000 and we continue to witness a rise in the number of people hospitalized. The highest number of people hospitalized are in the provinces of Qom, Lorestan, Ilam, Kurdistan, Yazd, Semnan and South Khorasan. Conditions in Qom and Lorestan are far more concerning than the others. The average death toll is reported at 23.5 for each million people. This is around three people per million more than last week. The highest Covid-19 death toll are reported from the provinces of Qom, Markazi, Ilam, West Azerbaijan, Alborz and East Azerbaijan. The provinces of Qom, Markazi and Ilam are far more concerning than other provinces,” she added, according the regime’s official IRNA news agency.