As the wave of protests spreads throughout the Middle East, American influence in the region appears to be at an all time low. Perhaps the most striking example lies in Iraq, which now appears to be sliding into a repressive regime backed by Iran. This, after billions of American dollars and thousands of American lives were invested with the supposed intention of bringing a new era of stability and democracy. And what of the 3,200 Iranian refugees who are now trapped in the Iraqi prison dubbed “Camp Liberty”, after being promised protection by the U.S.? Is this the legacy the United States wanted to leave in Iraq?

Since the U.S. withdrawal, the Iraqi Prime Minister Nouri al-Maliki’s has moved to consolidate power leave little doubt of his intentions to dominate the political scene, pushing out Sunni and Kurdish participants from government.  In fact, Maliki waited less than one day after the withdrawal of U.S. troops to put out an arrest warrant for vice-president Tariq al-Hashemi, sending troops and tanks led by Maliki’s son to surrounded Hashemi’s house.  Earlier this month, Hashemi was sentenced to death in absentia in a trial many labeled as a sham. Maliki has also turned its back on requests by the U.S. to stop supply routes from Iran to Syria using Iraqi airspace, effectively enabling the Assad regime to survive. Maliki’s brutality is on par with those of Iran and Syria, as has been documented in numerous allegations of torture and murder in government prisons.  Maliki also commands his own unit of highly trained Special Forces which have been dubbed “Fedayeen al-Maliki” by Iraqis.

As far as the U.S. is concerned, the United States still has a lot of leverage over the Iraqi government. It cannot forsake the promises it. made to those it left behind? The United States is tied in with the fate of 3,200 Iranian refugees who previously resided in Camp Ashraf in Iraq. U.S. forces signed an agreement with members of the camp in 2003, and promised them status as protected persons under the 4th Geneva Convention. A promise which was broken repeatedly when the United States withdrew from the camp and delivered it to Iraqi forces, who subsequently killed 49 residents in two attacks in 2009 and 2011. 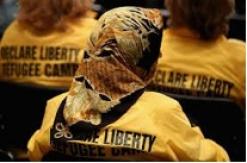 Not only has the United States failed to uphold its promise of security to the residents of the camp, but it has enabled Iraq’s continual suppression by calling for residents to relocate to the notorious “Camp Liberty”. This facility has been described as a prison, with the intention to make life miserable for resident, effectively at the mercy of Baghdad and Tehran.  A report published by the United Nations Working Group on Arbitrary Detentions, said the living conditions in Liberty blatantly violate international laws and of the Universal Declaration of Human Rights.

“My conclusion is that the US would be well served by a serious re-look at the facts on the ground in Iraq. I am concerned that Iran’s agenda, reflected in Iraqi government actions, is seriously at odds with the United Nations’ goal of conducting “refugee status determination” with each of the Iranian exiles and arranging for third countries to accept them as refugees.”

As the evidence mounts, it has become all too clear what will happen to these Iranian dissidents if the U.S. turns its back on the refugees in liberty. Not only does the United States have a moral obligation to these refugees, but also an international legal obligation which continues to this day. It is time or the United States to act to ensure the lives of those living in Camp Liberty, and to stand for justice in Iraq. The first step in this direction is to urge the United Nations Refugee Agency, UNHCR, to declare Liberty a refugee camp to ensure that the residents are accorded fundamental rights and protections consistent with refugee and international law.